Home > From Lab to You > How Science Becomes Medicine

Clinical translation is the multi-step process of turning scientific discoveries made in the laboratory into real-world medical treatments. This process involves testing a potential new treatment in a series of experiments to assess its safety and effectiveness. When tested on people in the context of a rigorous clinical trial, many possible new treatments fail to be proven safe and effective.

Basic research involves figuring out how living organisms, from the cellular level up to the whole animal or person, work and also what can go wrong in disease or injury. Experiments in the lab are where scientists come to understand and test the scientific principles that underlie important medical discoveries.

A vital part of the research process is replication and external (or peer) review. Scientists open up their methods, results and conclusions to the scrutiny of outside experts, typically through publication in peer-reviewed journals. Other scientists replicate the same experiments to reach the same outcomes. In this manner, scientists regularly collaborate with and build upon the discoveries of their peers.

Preclinical research builds upon the findings of basic research and the understanding gained of disease. It involves the translation of this scientific knowledge into the development of potential treatments. Scientists study how these new treatments work in animals and may also test new treatments on lab-grown animal tissues or human tissues.  Just because a treatment shows promise in an animal, however, does not mean it will be effective in a human, which is why clinical trials are so important.

Clinical trials start with a small number of people and are focused on testing safety. As the procedures are perfected and the risks evaluated, the number of participants is gradually increased and the effectiveness of the treatment is more closely examined. Learn more about Clinical Trials here.

Sometimes, in attempting new surgical techniques or where the disease or condition is rare, treatments might be tried on just one or two people outside the confines of a clinical trial.

During the clinical trial process, there are a number of checks to protect the rights of patients.

Fundamental to the process are:

If you are thinking about a clinical trial for yourself or a loved one, learn more about things you should consider here.

In many countries, a national agency reviews clinical research for evidence of safety and effectiveness, and then approves medical treatments for use by patients. The manner in which medical treatments are marketed is also regulated to ensure companies do not make health claims related to their products that have not been proven through the trial process.

However, the field of stem cell science is new and rapidly changing, and regulation is still catching up. There may come a time when stem cell treatments are regulated consistently by governments across the world. Until such time, people investigating stem cell treatments need to be aware of what is and isn’t regulated in the countries in which they seek treatment. A lack of regulation does not constitute approval or suggest safety or effectiveness. For example, clinics may offer autologous (from your own body) stem cell treatments, which may not be subject to oversight if the cells are minimally manipulated. However, cells taken from an individual are not necessarily safe for use in or as therapy for that same individual. 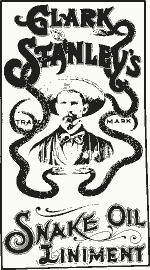 Perhaps you’ve heard of “snake oil,” which comes from the 19thcentury practice of advertising a single elixir as a remedy for all sorts of ailments without clear evidence of quality or health benefit. Unfortunately, false advertising and exaggerated claims are still a problem, and unproven stem cell treatments are among the miracle cures being sold today. Be aware of these things to know if you are considering a stem cell treatment.

Understand the potential and limitations of stem cells as treatments.

A stem cells blog from the International Society for Stem Cell Research.