Home > Modeling the Body on a Few USB Sticks: The Power of Organs-on-Chips

Modeling the Body on a Few USB Sticks: The Power of Organs-on-Chips

Shallow breath in, shallow breath out. Your diaphragm contracts as you inhale, creating a vacuum, drawing air into your lungs. Then it relaxes as you exhale, pushing the air out. Whether you experienced this after a run last week, or the memory is ingrained from gym class, one thing is for sure: your lungs require mechanical forces to develop and function throughout life. It is critical to model the complex and dynamic forces that our organs depend on, both to understand how they develop and what goes wrong when they fail.

While many biomedical advances have been made studying cells in isolation, researchers are learning that the closer they can approximate experimental conditions to the complexities of the human body, the better chance they have of identifying new treatments.

Just over 10 years ago, scientists developed a new way to study human organs in the lab, called organs-on-chips (OoCs) (see Figure 1). These small devices, the size of USB sticks, are made up of two major components: a clear, flexible, porous membrane and living human cells, which are often derived from stem cells. The flexible membrane has hollow channels that allow air and fluids, such as blood, to flow through the cells —something other models simply can’t do. As a result of this ability, OoCs can be used to model complex organ structure and function, from brain to belly. The flow of fluids in these channels makes OoCs a much better representation of the human body that traditional models of static cells in Petri dishes. 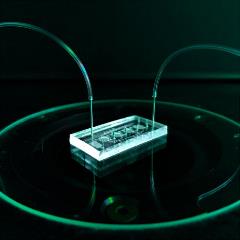 Figure 1. An example of an organ-on-chip. Chambers of cells sit in the middle of the rectangular device. Tubes allow for the flow of fluids, which could include immune cells, bacteria, or drugs. Credit: Mummery and Loskill, 2021, Stem Cell Reports.

As an example, scientists can derive cardiomyocytes — muscle cells responsible for making a heart beat — from human induced pluripotent stem cells and use OoCs to mimic the environment cardiomyocytes would normally experience in the body. Mimicking natural conditions by integrating mechanical stress, electrical sensors, and fluid flow improves heart cell maturation, and remarkably these muscle cells will “sync up” and beat together. This heart-on-a-chip model has potential applications for drug screening, drug delivery, and toxicology studies.

Additionally, OoCs can be personalized, using cells from a specific patient to test whether they might respond to a treatment, a technology that is being called patient-on-chip or more informally, you-on-chip. Cells from the patient can be reprogrammed into stem cells in the lab, which are then coaxed into the cell type needed for testing and then applied to the patient-on-chip. Scientists can then apply various treatments to the patient-derived cells to see which might be effective, before treating the patient. Scientists can test thousands of drugs on patients-on-chips to potentially uncover personalized medicines.

But the ability of OoCs doesn’t stop there. These chips can be combined to create what’s been termed a body-on-chip or physiome-on-chip. In one instance, scientists managed to build 10 different organs in a chip, which they maintained for four weeks. These advanced models have the potential to more closely mimic the human body (see Figure 2).

Researchers have used the physiome-on-chip to make interesting discoveries regarding the interaction between organs. Scientists used this model to study how gut and liver interactions impact ulcerative colitis—an inflammatory bowel disease causing inflammation and ulcers or sores in the large intestine. Strikingly they found that when they connected a gut-on-chip comprised of cells from a patient with ulcerative colitis to a healthy liver-on-chip, inflammation in the diseased gut was reduced! Further studies could identify the factors that led to this reduced inflammation.

In this new experimental model engineers and biologists are collaborating to understand biology and disease, with potential applications to benefit human health. Whether it’s personalized medicine for patients or studying the effects of pharmaceuticals on several organs simultaneously in a miniaturized system, OoCs have already begun to help shape how we approach model systems and health as a whole.
__________________________________________

Blog by guest contributor, Parmin Sedigh. If you would like to learn more about organs-on-chips, their applications, and future prospects, read the OoC Stem Cell Reports special issue here and listen to “The Intersection of Stem Cells and Engineering” on  The Stem Cell Report with Martin Pera here.