Home > I’ll Take My Burger with a Side of Sustainability

I’ll Take My Burger with a Side of Sustainability

Imagine that a chef personally asks you to taste a new burger recipe. It looks medium rare as requested, has a satisfying texture, and most importantly, it tastes delightfully meaty. What if they tell you that the burger you just ate was better for animals, the environment, and your health? Then they tell you that the burger was not made from a cow, but rather, from stem cells in a lab. Does that change how you feel about your meal?

Every year, humans consume 77 billion land animals, which has far-reaching consequences on the environment. Animal agriculture has detrimental impacts on land use, greenhouse gas production, water pollution, and antibiotic resistance. The current rate of factory farming is not sustainable, but even with an awareness of the harm to our environment, the majority of meat consumers (including myself) are not yet ready to entirely abstain from meat. So, what else can we put on our plates?

From the perspective of the customer’s palate, meat has three important attributes: taste, texture, and appearance. Thus, to recreate meat, we do not necessarily require a breathing animal, but rather a source of protein that looks like meat, tastes like meat, and has the same or better nutritional profile.. This is where stem cells enter the fray. It turns out that, over decades of research, scientists have discovered a lot about how muscle tissue, the main component of meat, develops in animals. Using this knowledge, researchers learned how to coax muscle stem cells, which can be isolated from a painless cow biopsy, to develop into muscle. By immersing the muscle stem cell in a liquid broth optimized for growth, it can expand one quadrillion times (that’s 15 zeros) in less than two months. The expanded stem cells can be fostered to form muscle fibers, which in three weeks, are ready to be amassed into free-form meat, such as meatballs or burger patties (see Figure). In theory, just a single stem cell can make more than 50,000 burger patties (assuming a quarter pound each) in less than three months. Compare that with raising a cow for one and a half years for a maximum of 2,000 burgers. 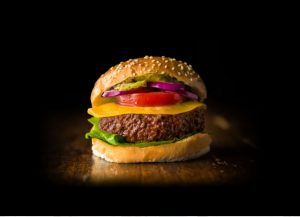 These numbers are astounding, but they are not the only advantage of stem-cell based meat, or as it is more commonly called, “clean meat” or cultured meat. On top of obviating the environmental and ethical dilemma of relying on animal agriculture, cultured meat also provides an easy route for enhancing nutritional content by adding vitamins or other nutritional components during the culture process. Additional cell types added to the meat can replicate and enhance the taste and texture. Stem cells from accompanying tissues, such as fat, can be grown alongside muscle, and cells can be 3D-printed or grown in scaffolds to recreate the taste and texture of structured meats, such as fillets and steaks. Cultured meat therefore offers the potential for a more enjoyable, nutritious, ecological, and humane way to be a carnivore.

Obstacles, including that of public perception, however, remains. While anything new may come across as unnatural, untrustworthy, and ultimately unappetizing, this is mostly a psychological hurdle. If you think about it, we already consume cultured products like cheese and yogurt; the only difference is the starting cells used. Taste-tests by food critics and scientists have even determined that cultured meat is almost indistinguishable from its regular counterparts, and in one study, learning about its societal and personal benefits actually led to a higher taste rating and a willingness to pay more for the meat. Thus, given public education, proper framing, and time, cultured meat can become a competitive alternative to regular meat.

In recent years, the public’s appetite has grown for another type of meat alternative - plant-based meats - which is already competing in the market – ever heard of Beyond or Impossible Burgers? Cultured meat is closely following this trajectory and has come a long way in terms of increasing production and lowering costs since the first proof-of-concept cultured burger back in 2013. In fact, the first cultured meat for commercial sale is now available in a restaurant called 1880 in Singapore - if you are curious to give it a taste.

Now doesn’t your burger taste best with a side of sustainability?

Blog by guest contributor Kevin Gonzales, PhD, postdoctoral fellow in the lab of Elaine Fuchs at The Rockefeller University, NY, USA. To learn how else stem cells are being used in sustainability read “Can Stem Cell Research Save Endangered Species” or register for our Digital Series “Stem Cells and Global Sustainability.”