Each year people around the world fall victim to about 1.8 - 2.7 million venomous snake bites. Many of these injuries go untreated due to lack of access to available treatments or health insurance, resulting in more than 100,000 deaths and approximately three times as many permanent disabilities. New therapies are needed to treat snakebite envenoming, a neglected public health issue. A new therapeutic tool to treat venomous snake bites may have come from an unlikely source – stem cell research.

There are about 250 types of venomous snake species with the highest prevalence of snakebite envenoming in Africa, Asia, and Latin America. Snake venom is composed of multiple natural toxins, enzymes, proteins, and peptides, which act together to cause rapid tissue damage or death. The exact venom composition is incredibly diverse and species-dependent, making treatment highly specific for each snake species. Snake bites can be lethal or lead to life-long, chronic health problems, such as neurotoxicity and nerve-related paralysis, irreversible kidney damage after excessive renal bleeding, or limb amputation. 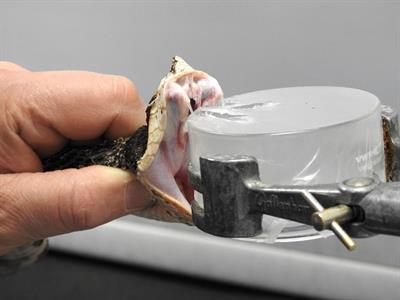 Most current treatments aim to neutralize the venom, such as antivenom. In general, antivenom is made by harvesting snake venom through manually milking the snake (see Figure 1 on left) and injecting small doses of the venom into donor animals, such as horses, to elicit an immune response and antibody production. These anti-venom antibodies are then injected into the snake bite victim where they selectively recognize and bind to structural components of the snake venom, neutralizing the toxins.

Making anti-venom in this way is time consuming, hard to scale up, and must be done individually for each species of venomous snake. According to the World Health Organization, many antivenom-manufacturers have ceased production in the last 20 years, causing reduced supply and drastically increased prices. Unfortunately, effective alternative therapeutic approaches are scarce. 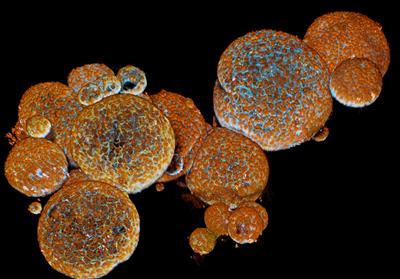 Strikingly, these organoids contained cells that could secrete functionally active venom that exerted species-specific effects on neurons and muscle cells in the lab. Further, organoid-derived venom has similar composition to venom directly milked from snakes. Scientists are now hoping to establish a biobank, or repository, of snake gland organoids for all venomous snakes of medical relevance, in order to create an unlimited supply of venom.

Since publishing the initial research paper, Jens Puschhof says the group has already expanded the organoid repertoire to include a broader selection of venomous snakes. He added that  using venom from organoids rather than milking snakes could help produce a safer, more reliable product, as there is variation in venom components of individual snakes. Next steps include using venom organoids to purify the toxic components and make antibodies in the lab, rather than in horses, to more efficiently manufacture antidotes and enhance global access.

A biobank of snake venom organoids could potentially provide treatments for other diseases. The U.S. Food and Drug Administration (FDA) has previously approved drugs that are derived from snake venom for treating acute cerebral infarction, acute coronary syndrome, and as prophylaxis for hemorrhage during surgery.

Strikingly, early research indicates that peptides from snake venom may have antitumor effects. Components of snake venom called disintegrins, such as Contortrostatin from the snake Agkistrodon contortrix contortrix, can inhibit blood vessel formation and cancer cell adhesion in lab models of human metastatic skin cancer. Additional research indicates that a potent peptide found in venom could interfere with blood vessel formation, reducing delivery of nutrients to tumors in a mouse model of breast cancer. The availability of venom-biobanks would allow scientists to further study snake venom components to see if there are opportunities for biomedical innovation.

Fifty people are bitten by a snake every five minutes, and one will die in this silent healthcare crisis. Novel stem cell research has allowed scientists to successfully grow mini venom-producing organoids  in a petri dish, which may be used to develop accessible and affordable antivenom therapies. This scientific innovation of developing snake venom gland organoids has the potential to save people around the world from deadly snake bites and other diseases.

Thank you to the three graduate students in Hans Clevers’ lab at the Hubrecht Institute in the Netherlands, Jens Puschhof, Yoep Beumer, and Yorick Post who contributed to work shown in Figure 2.