If you’ve ever broken a bone, you are not alone. Statistics show that, over a lifetime, the average person experiences 2 bone fractures. For those with osteoporosis, that figure escalates, on average, to one bone fracture every 3 seconds, or nearly nine million fractures a year. Bone fractures, bone pain, and deformities that result from skeletal trauma and disease cause significant personal and economic burdens.

Recently, scientists have discovered a new cell type, human skeletal stem cells, that are providing insights into human skeletal development. These cells, which give rise to both bone and cartilage, may help researchers design potential therapeutic approaches to treat skeletal injuries and diseases.

What is the skeletal system made of?

The human skeleton is comprised of many different cell types, including bone, cartilage, and stroma, a type of supportive tissue. While it might seem rather inert, your bone is a living tissue that is always undergoing self-renewal—old cells are constantly being replaced by newer cells. In young people, the rate of bone turnover yields a net gain in bone mass. With age, bone growth slows and bone mass is gradually lost, which can lead to fragile bones that are more likely to fracture (see figure). Bone breaks can heal on their own, however they don’t always heal perfectly. Cartilage, on the other hand, exhibits little, if any, regenerative properties. Until the recent discovery, the stem cell that gives rise to these skeletal tissues had eluded scientists. 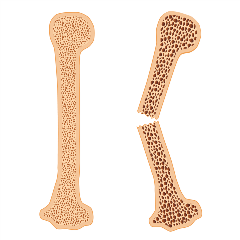 Illustration of normal bone (left) as compared to aged or diseased bone (right) that has reduced mass and is more susceptible to fracture.

Is there a human skeletal stem cell?

A research team from Stanford University, USA set out to find and identify human skeletal stem cells to better understand their growth and repair. They found cells in the growth plate of fetal human femur bones that could self-renew and give rise to bone, cartilage, and stroma, which defines them as the human skeletal stem cell (hSSC). Human SSCs could be isolated from both fetal and adult bone, and upon comparison appear to become more specialized with age. Researchers found that stem cells isolated from different tissues had different inherent properties, with stem cells isolated from fetal tissue more likely to form cartilage than those derived from adult bone, similar to normal development.

To determine whether hSSCs respond to injury, researchers examined their behavior in skeletal samples from patients undergoing bone grafts and found that hSSCs do expand in response to fracture, indicating regenerative behavior. Scientists also found that hSSCs can give rise to supportive stromal tissue which can fulfill a critical role of the bone marrow - supporting blood stem cells. The ability to grow blood cells in the lab has so far eluded scientists, but better mimicking their natural environment could improve these efforts. These discoveries have great potential for regenerating tissue to repair the human skeleton and all that entails.

How did humans grow so tall?

Identifying the hSSC also allowed researchers to learn about human-specific genes that regulate bone growth. By comparing human and mouse skeletal stem cells, scientists have identified genetic differences that may account for changes in size and biomechanical properties. While the majority of expressed genes are common to both human and mouse SSCs, several human-specific genes, when expressed in mouse skeletal stem cells, led to increased bone growth. It therefore appears that these genes regulate skeletal size at the stem cell level. Scientists may eventually find ways to modify these genes to promote stem cell self-renewal or promote the formation of bone or cartilage.

Discovery of the hSSC, a “bone-a fide” skeletal stem cell, dispels earlier assumptions that mesenchymal stem cells (MSCs) were the stem cell population in the bone. MSCs are a controversial and poorly characterized heterogenous population of multiple types of cells, which includes stem cells. hSSCs provide potential for therapeutic use, however more testing and replication is needed before they can be considered for clinical use.

Potential for healing and repair

We know that our ability to repair and regenerate bones and joints diminishes with age, and now we can better understand the injury and aging processes by studying the cells that generate these tissues in humans. With further study, we hope to gain insight into how to better diagnose skeletal diseases, and one day identify treatments that could activate stem cells in the injured or diseased body, produce new bone or cartilage in the lab for replacement cell therapy, and develop personalized therapies.